Wayward Troubadour is as fitting a title for the album as well as for the man behind it. It is Mike Aiken’s seventh studio album. It took almost three years to complete the collection of 11 songs on this album and it may well be considered a follow-up to his Grammy-nominated „Captain & Cowboys“ album of 2013.

Released this Spring, Wayward Troubadour is less a Country, Folk, Roots or Americana album than a captivating mix of all four with a dash of other styles. 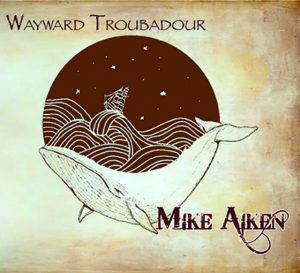 Aside from being a troubadour, or singer/songwriter and musician if you prefer, Mike is also a U.S. Coast Guard captain, who lives part of the time with his wife Amy on their own boat, when not on tour in the USA or Europe.

When not appearing with a full band at festivals and other big events, Mike and Amy are just as comfortable performing as a duo on small club stages or at private events. For more information, click HERE

This site uses Akismet to reduce spam. Learn how your comment data is processed.