An inspired marriage of country classics and mariachi rhythms named for the place where it was recorded, Tularosa honors Stephanie Urbina Jones’ musical icons — a string of legends from Dolly, Patsy, Willie and Merle to Johnny and June — and the Mexican heritage that feeds her sound and soul. It came together after Urbina Jones decided she wanted to add some spice to a radio-sponsored gig she was about to play in New Mexico. 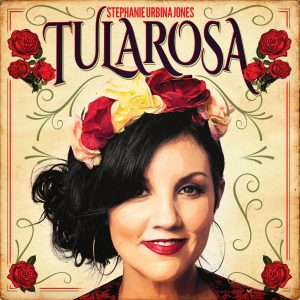 Stephanie Urbina Jones, producer/guitarist Patterson Barrett and their band of mariachis from El Paso, Texas, and Tularosa, New Mexico, deftly turned “You Ain’t Woman Enough (To Take My Man)” into a romp and Dolly Parton’s “Jolene” into an urgent drama. She does “Ring of Fire” as a Spanish guitar-laced duet with famed Texas Tornado Augie Meyers; Barrett did the fine string arrangements sweetening the Doug Sahm/Tornados Tex-Mex standard “Is Anybody Goin’ To San Antone”; and the Lynn Anderson hit “Rose Garden” is simply elevated to a new level. And it all sounds so great — in English or Spanish; “Jolene” and “Ring of Fire” appear in both languages — it’s a wonder no one’s recorded an album like this before. Read the full story behind TULAROSA

The San Antonio native landed a songwriting deal almost on a whim after relocating to Nashville. One of her first compositions became the title track of Lorrie Morgan’s Shakin’ Things Up album. A few years ago, another song she co-wrote, sung by The Voice’s season seven winner, debuted at No. 1 on the Billboard country chart.

Stephanie has performed at some of the world’s most prestigious festivals, among them Switzerland’s Montreux Jazz Fest, Country Night Gstaad and Japan’s Country Gold. She’s also duetted with Willie Nelson and sung with The Time Jumpers (band of super elite players including country music icon Vince Gill). In October, she can be seen and heard in Switzerland at the Country Night Grindelwald festival.

This site uses Akismet to reduce spam. Learn how your comment data is processed.